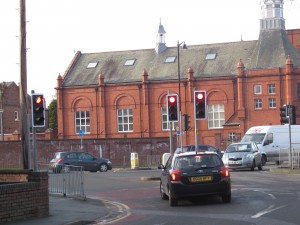 ACCORDING to experts the country could scrap three in every four set of traffic lights and no-one would notice a blind bit of difference. The traffic would still flow – or not – and we’d be just as safe. Our columnist Alan Lowe reckons there are too many in Northwich and named a few, which turn cars and drivers alike into a snarl up. Grrr.

Now, when you next approach a set of lights, note you are actually coming up to two. Quite apart from the number of points at which signals are sited there now always two sets of lights facing you. Pull up at a junction because the light is on red and six feet further back is another set of lights, also showing red. Or green. Stop or

Go, you are told at least twice. But why do we need telling twice?  More to the point, when did two become standard? When did all this happen? When did they start putting up two signals every time one was deemed necessary? Sometimes things sneak up on you and you do not notice them until they are fact and may have been so for years. I suspect that is the case with traffic lights. No-one ever said it was going to happen but then, one day, there they are.

And, it is at least two. Tootle down London Road from Brockhurst Hill, Leftwich, to the junction by the former art college on your nine feet of single carriageway and you are met with, not two, but three sets of lights. Whichever one you look at renders the other two useless, so you actually only need one. I can show you a not dissimilar road at Altrincham where you are confronted by four sets of lights and on a road heading out of the same town there are the standard two per carriageway and, standing guard further back, another two. On reserve presumably. It will move up into a new position should anything happen to a team-mate.

It is the same mindset that decrees all manner of safety features on the roads, like the big orange oblong at a bus stop, in case the sign saying Bus Stop and  a queue of people under a bus shelter aren’t enough for you. The same people are behind the huge number of road signs in this country. You can drive for miles and miles abroad and not see a single sign. Here, if there is any kind of gap when there is nothing to say, they put up a sign telling us how many people have been killed.